Take a bowl of diced raw fish, marinated in soy sauce, dressed with oil and sesame seeds and a handful of coriander and spring onions. Is it not a delightful image? It certainly is, and the best news is that it exists - you have just read the basic ingredients of poké (pronounced Poh-Kay), a traditional Hawaiian dish that is conquering gourmet restaurants all over the world, and rightly so. Food trends from Los Angeles to New York are talking of nothing else and poké-mania has spread to Europe as well.

A cousin of Japanese chirashi and South American ceviche, poké is a kind of “destructured” sushi and has all it takes to become a culinary success - in addition to being quick and easy to prepare, it is also healthy food that looks attractive. Poké means to cut, to slice in Hawaiian language. It was a traditional dish eaten during fishing expeditions by fishermen, who dressed it with what they could find. In Hawaii it can be found everywhere - sold on street corners, in bars and even in service stations. You could go into a greengrocer’s and find a poké bar with 30 different combinations. 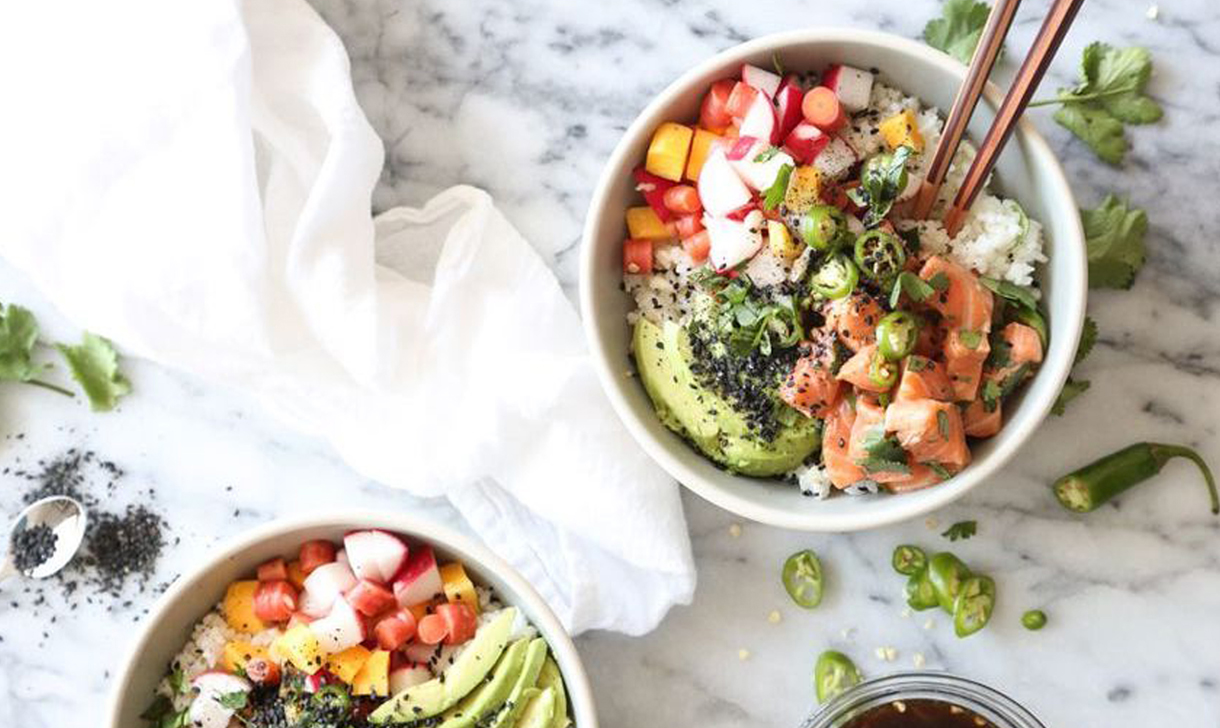 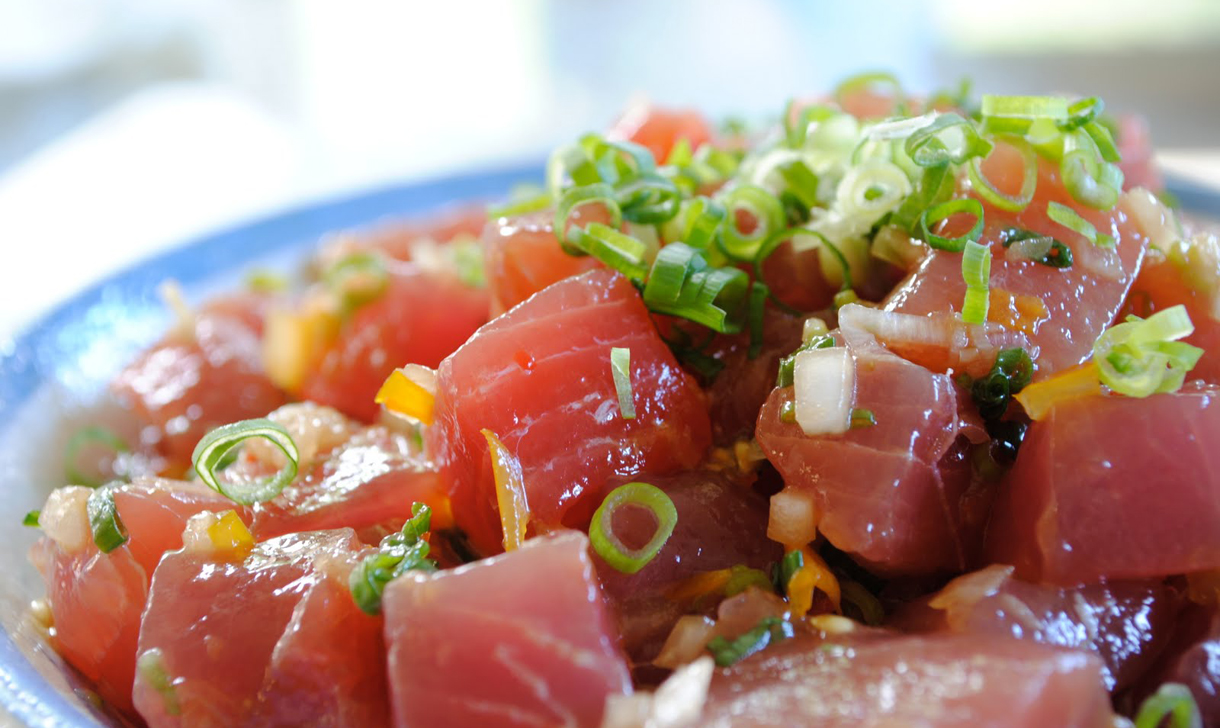 Do not confuse it with sashimi or tartare: unlike these dishes, poké consists in fish diced into large chunks, marinated and mixed with other ingredients as in a salad. Unlike ceviche (which is prepared more or less in the same way and is made markedly acidic by lime), the taste of poké is round, full and textured because the fish is marinated with soy sauce and sesame oil, clear evidence of the influence of immigrants from Japan and Korea.

When it comes to nutritional value, poké, half way between a salad and a main course, is lacking nothing -  it has a high concentration of proteins, fresh vitamins, mineral salts and good fats. It also has nothing to be ashamed of in terms of gourmand: the fish chunks (usually red tuna, but also salmon, octopus or crab) come with equally fresh and healthy ingredients such as avocado, lime, tomatoes, lettuce or cabbage leaves, cucumber, courgettes, ginger and chilli pepper. There are also tobiko (flying fish roe), bean sprouts, seaweed, edamame, tofu, macadamia nuts and mango. All the above is dressed with lime, spring onions and coriander and served on a bed of rice, lettuce leaves or black cabbage leaves. 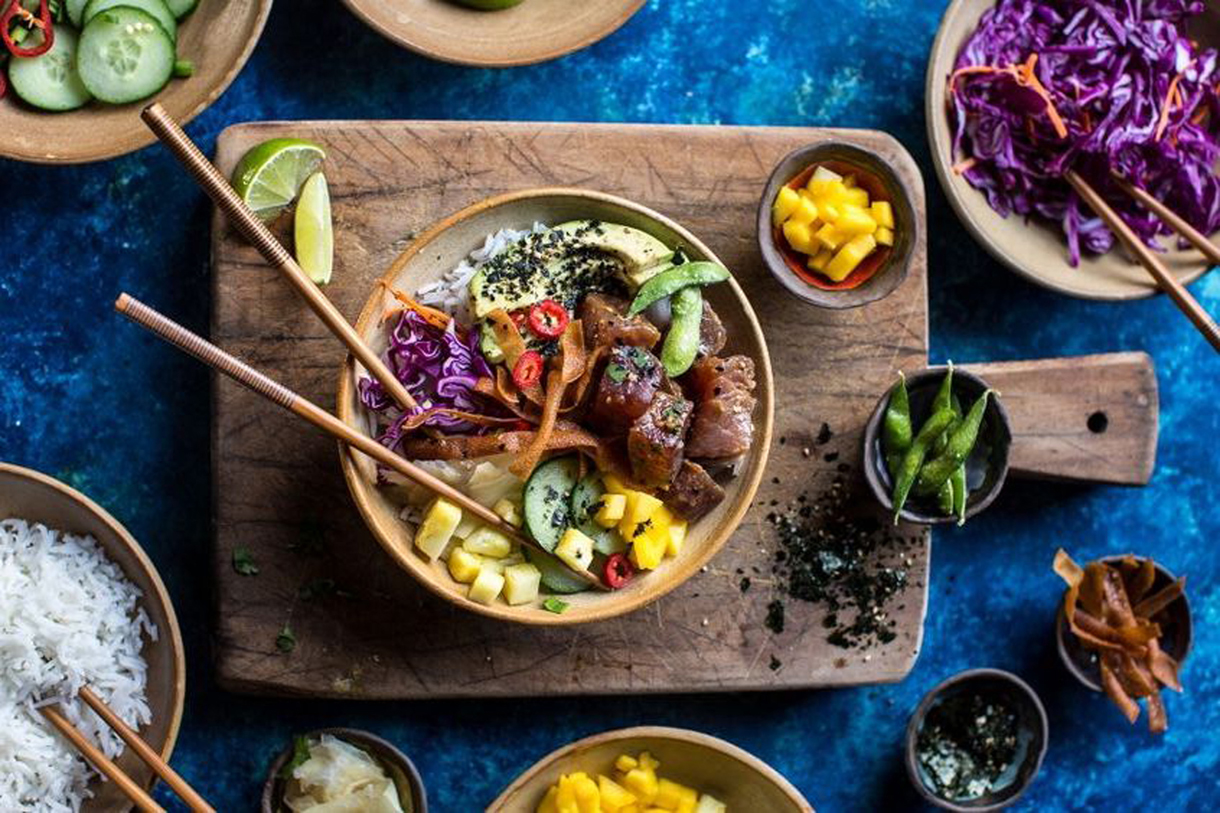 Hawaiian food is becoming increasingly popular and in recent years there has been a marked improvement in general quality even on the island. Hawaiian chefs are tired of limiting their cuisine to pineapple, Spam (short for Spiced Ham, a kind of tinned meat produced by a well-known US company, which is so popular it has become a staple in Hawaiian cuisine) and Poi, a sweet cream made of Taro (a potato-like tuber), prepared only on the island and eaten in massive amounts. 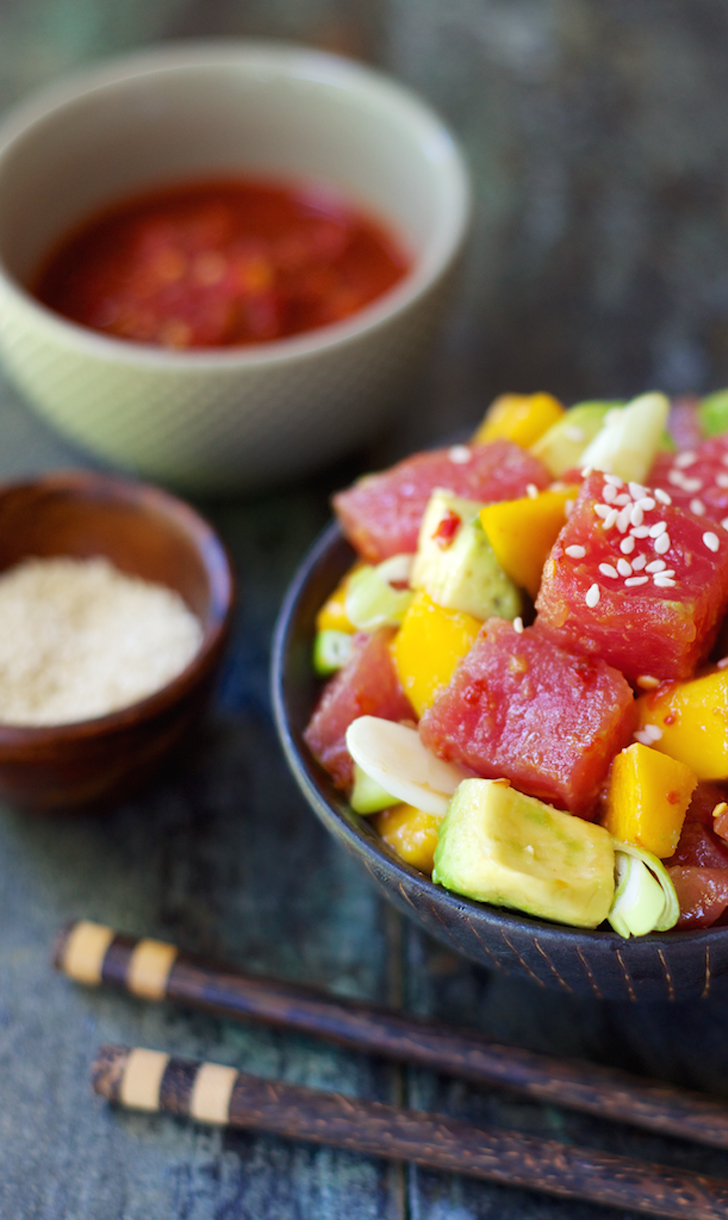 Let us add that the trend of eating raw fish, which has risen incredibly in recent years, has opened the door to dishes that once we would not even have dreamt of tasting. Poké is a winner for another crucial reason - it can be customised with an essentially unlimited variety of ingredients, and every chef has his or her own personal recipe. Californian Poké, for example, which is dressed with spicy mayonnaise sauce, is served on rice or black cabbage, with kelp spaghetti, shallots and black sesame seeds. The most creative variants also have black rice, quinoa, bulgur or fregola. In addition, the raw fish is served in a bowl, which makes it a simpler and quicker solution than sushi and therefore a natural evolution of the trend. These happy coincidences mean poké is riding high.

Where to eat poké? Pretty much anywhere now. If you are lucky enough to be on the islands of Hawaii while you are reading this article, you cannot miss the legendary Da Poké Shack in Kailua Kona, but you can easily find it close to home. In addition to poké-bars, which are springing up everywhere, if you are in New York go to Noreetuh. This restaurant prepares Hawaiian cuisine dishes in modern key and serves poké dressed with different kinds of seaweed and pickled jalapeños. In Milan, Charlie Pierce, chef at T.O.M.,prepares it with tuna, toasted Italian hazelnuts, avocado cream and fried wonton. In London you will be entranced by the bowls of the Black Row Poke Bar, newly opened in Mayfair by Kurt Zdesar (who is behind Chotto Matte and Nobu).

As the first winter chill bites, just step into a poké-bar and try all the combinations while sipping a cool beer. You will be transported to a white beach, seated next to your surfing board, with the undertow of the ocean tugging at your feet. 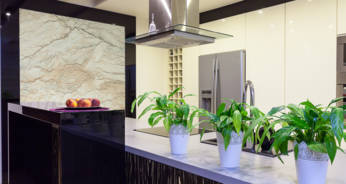