Beef steaks dancing in the streets of Kansas City, a twenty-metre wall made of slices of orange, blue and red bread, rice dishes that represent the flags of the most powerful nations on Earth. Food gains a new identity in the creative universe of Antoni Miralda, the Catalan artist who uses irony and critical spirit as dressings for his social and collective projects.

An overall vision of this artist’s never tiring artistic experiments, with and about food, can now be admired at the Museum of Contemporary Art in Barcelona (MACBA), where the “MIRALDA MADEINUSA” exhibition, curated by Vicent Todolì, will be open until 9 April 2017. The exhibition includes the most significant works of art created by Miralda between 1971 and the end of the Nineties, while he was living in the United States. There will also be sculptures, drawings, photographs and visual recordings related to this period. 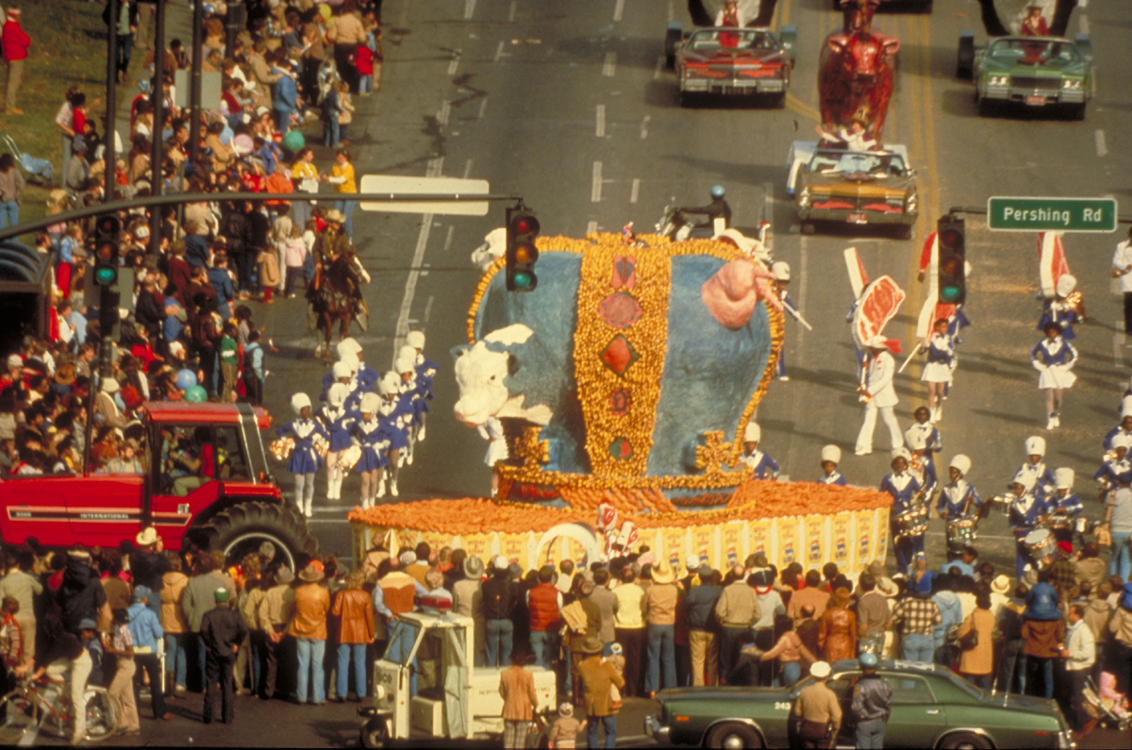 An overall vision of this artist’s never tiring artistic experiments, with and about food, can now be admired at the Museum of Contemporary Art in Barcelona (MACBA), where the “MIRALDA MADEINUSA” exhibition, curated by Vicent Todolì, will be open until 9 April 2017. The exhibition includes the most significant works of art created by Miralda between 1971 and the end of the Nineties, while he was living in the United States. There will also be sculptures, drawings, photographs and visual recordings related to this period.

“I want to involve viewers in a process that challenges the relationship between food and culture while being aware of the contradictions and the politics of economic systems.”

The documentation on the collective action that the exhibition opens with is Sangria 228 West B’way. Set up in New York in 1972, it was a tasting session of coloured spiced rice with projected images, which involved hundreds of participants.

Hundreds of people also walked in the streets at the centre of Kansas City in 1981, to view the Wheat & Steak public art project. This sui generis procession went side by side with the annual American Royal show, an event in which the harvest and livestock are celebrated andfarmers from every state come together. 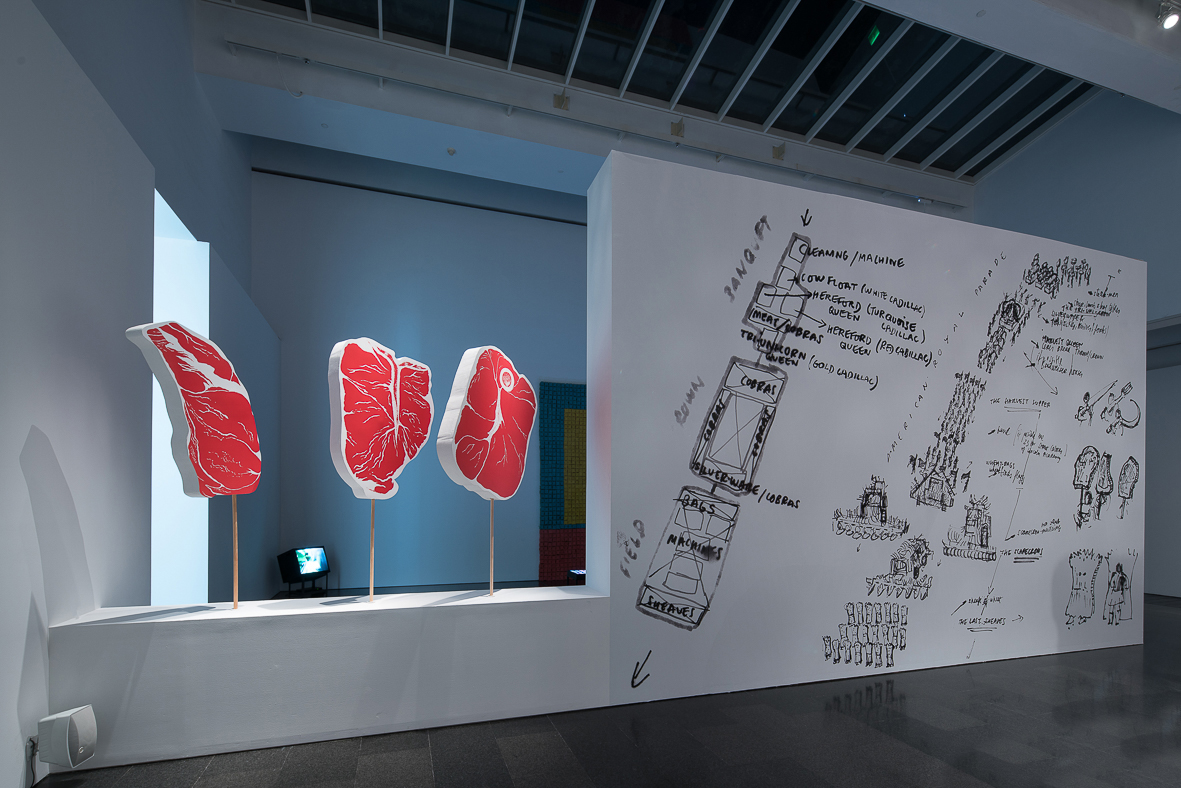 In Miralda’s processionthe majorettes did not spin the classic batons or pompoms - the waved enormous beef steaks instead. They were followed by cadets armed with knives and forks, farm machines turned into scarecrows and carts drawn by cows.

Triumphantly towering above them all was the Tri-Uni-Corn sculpture, made of three animals one on top of the other in a pyramid - cow, pig and lamb, transformed into unicorns for the occasion. Their bodies showed a map of edible cuts for each animal.

The show contained multiple references and was perfectly integrated with the reality of the American event, in which food culture, rituals and social behaviour converge. The use of symbols linked to food used on a daily basis is, for the Spanish artist, a privileged channel to start a broader discussion on social issues and policies. 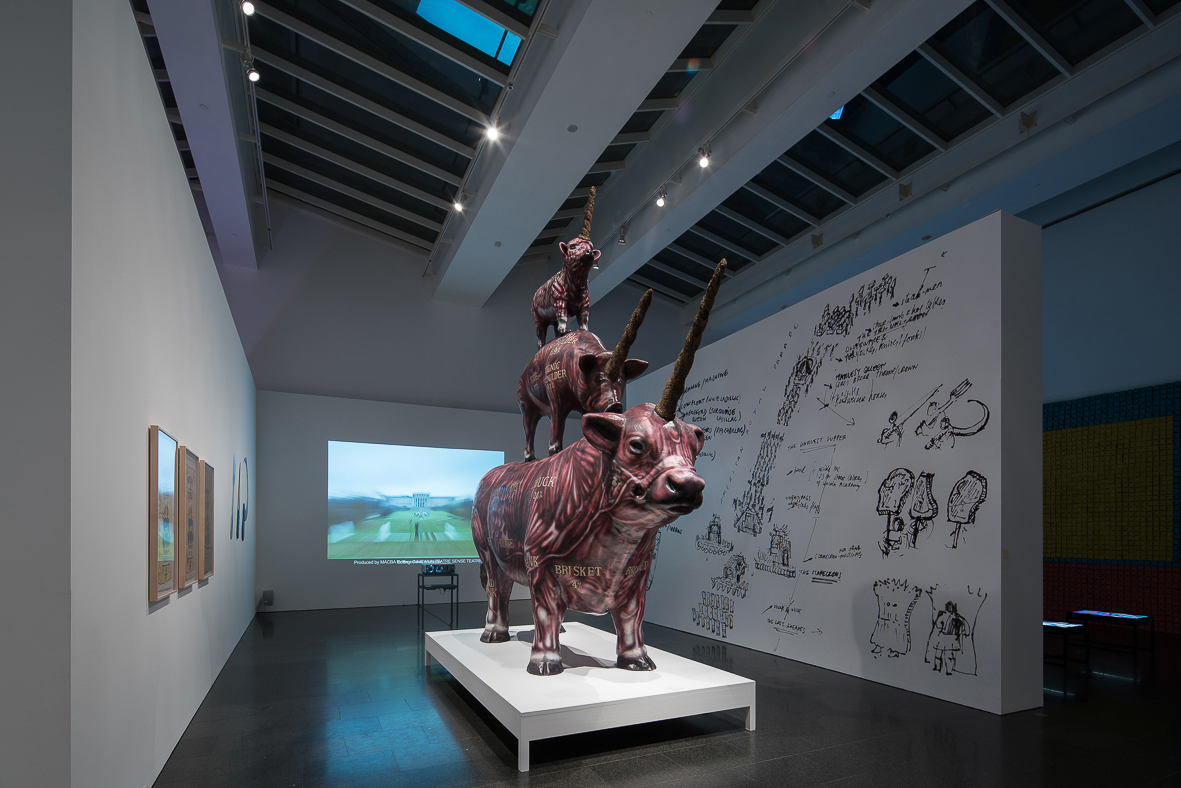 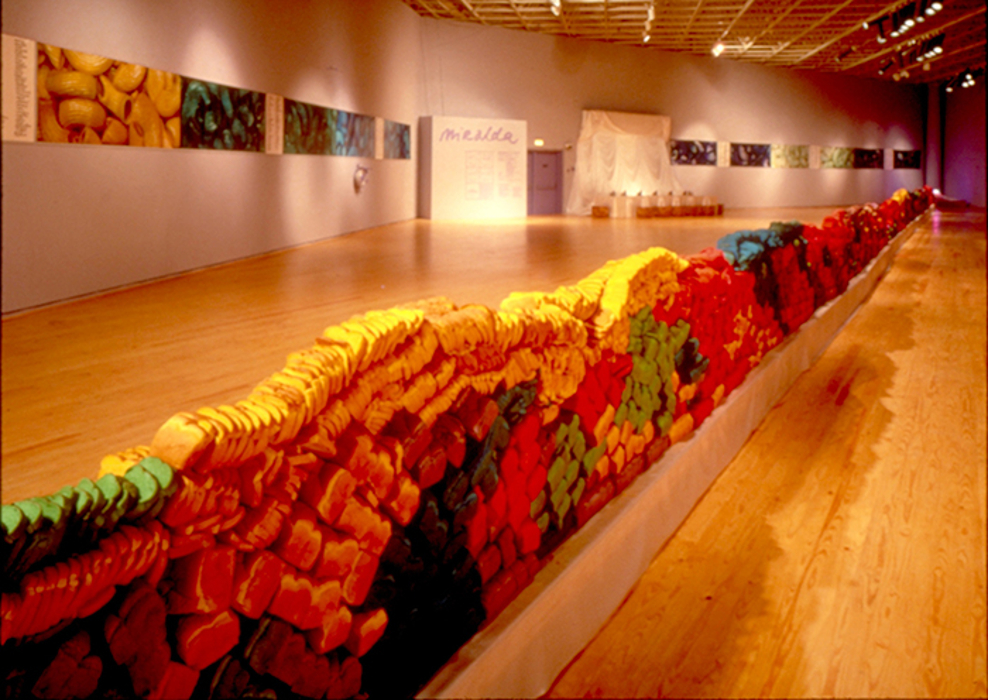 An example of this kind is Breadline, a monumental twenty-metre long wall made of slices of bread coloured red, orange and blue, which Miralda uses to make people reflect on the richness/poverty dichotomy. Presented for the first time in 1977 at the Museum of Contemporary Art in Houston,this art installation, which stretched along the entire museum, represented the long queues that people faced to buy food during the Great Depression. The line represents hunger and is in stark contrast with the plentiness evoked by the enormous amounts of bread.

Food situation for a Patriotic Banquet is a work of art designed to go bad - literally. In the eight plates the rice is coloured to match the flags representing the world’s most powerful countries, such as France, Germany and China. The menu laid out on the table contains a musical score with the national hymns of the represented countries. The gradual decomposition of the rice brings to mind the loosening of those countries’ identities as a result of the decline in colonial logic.

The highest expression of the fusion between food and art is in the Tapas Bar & Restaurant, which was re-created along the lines of the one Miralda opened in the Eighties in the Tribeca district in New York, with the  chef Montse Guillén 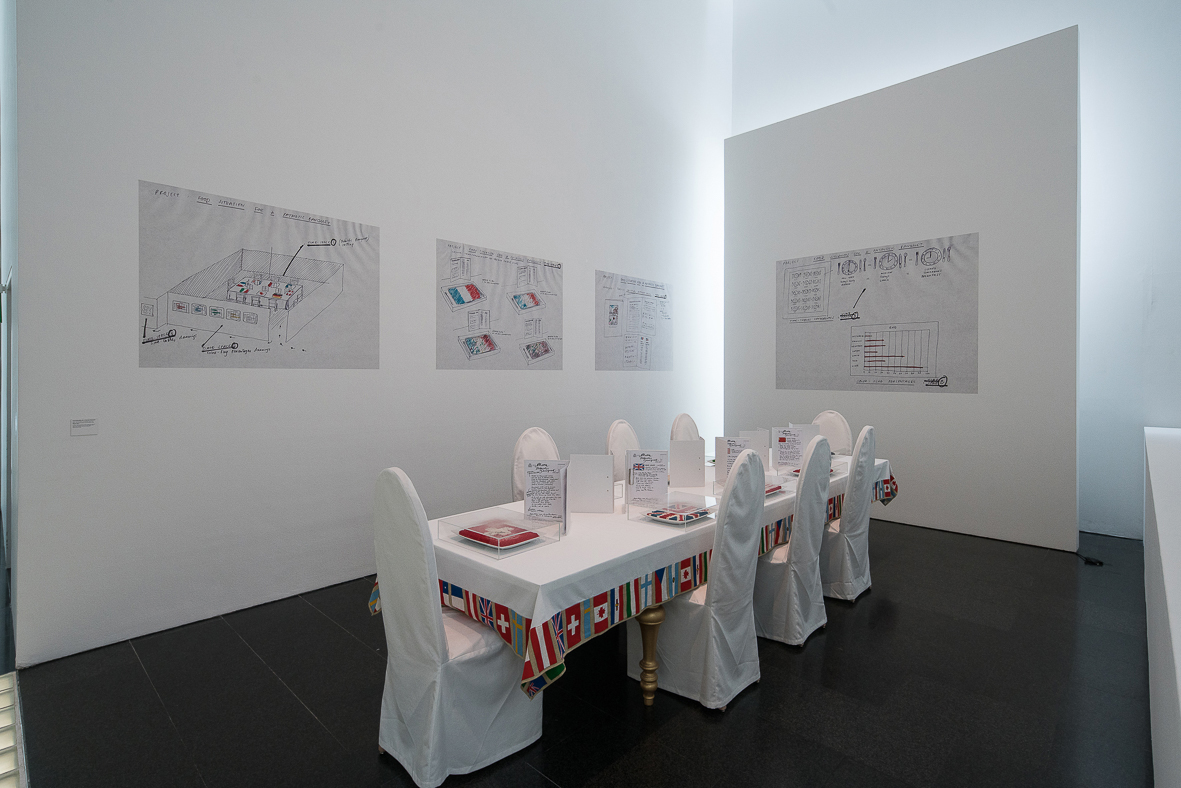 Born as a social and artistic experiment, the El Internacional Tapas Bar & Restaurant rapidly became an iconic symbol of the New York set, as much as the tapas served here played an important role in Spain’s cultural avant-garde in the Great Apple - mushrooms in sherry sauce, grilled squid with aubergines and peppers, tortillas and snails in red sauce.

To bring to mind the spirit of the time, the MACBA has set up an art installation that includes the garish red façade, with the Statue of Liberty in the background and the carpet of flags. 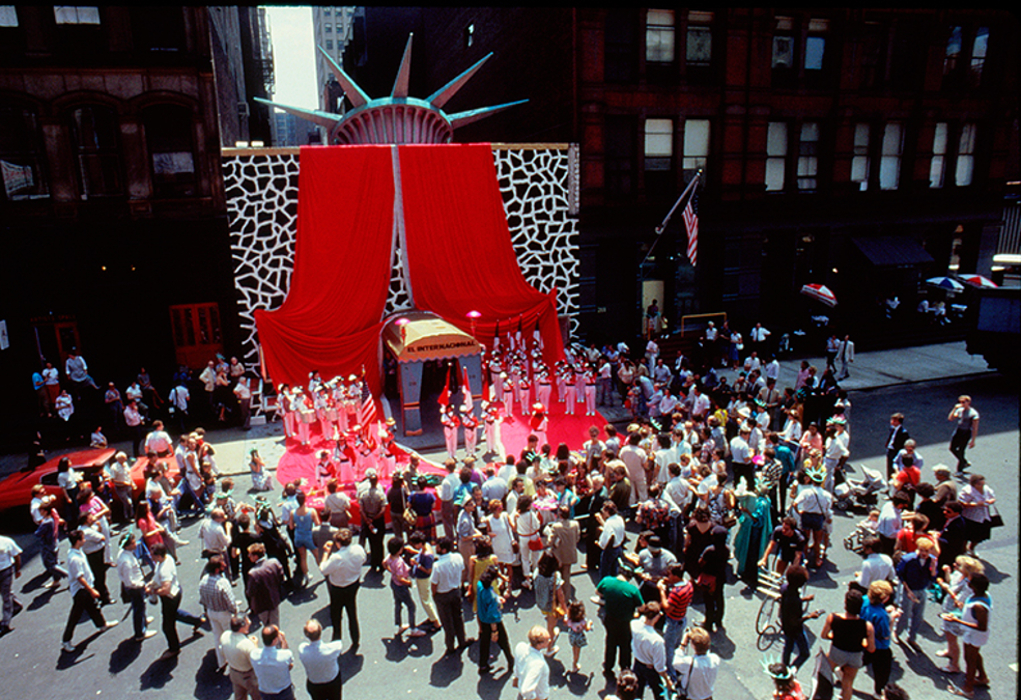 Patrons of the New York restaurant included - in addition to large numbers of people - characters such as Jean Michel Basquiat, Andy Warhol and Robert de Niro. Artistic and culinary experimenting came together here. Customers were involved in unexpected and stimulating situations in which art, design, architecture and cooking interconnected among garlic braids, hams and chilli peppers of all kinds hanging on the walls. They were not simple decorations - they were cultural items in their own right. They were the production of an artist who was many steps ahead of the times, with an attitude that is now completely part of our collective imagination - to involve and entertain, with the precise aim of making individuals think carefully about the societies that they, in thousands of ways, contribute to creating every day.