The essence of Peru

What is hidden in the kitchens of this brightly coloured country

As brightly coloured as the dresses of the mamitas, as scented as a day at the market, organic and fresh - this is Peruvian cuisine, the jewel in the crown of gastronomy culture in South America. It can boast of four hundred ninety-one local culinary specialities.

The country of Peruis half way between the Pacific Ocean and the snowy tips of the Andes, between fishing and agriculture. Peruvian cuisine is the absolute expression of this area, with strong flavours, some more delicate, some quite rich. Few places in the world offer such a variety of indigenous products, prepared with a style influenced by Asian, European and African culture. These influences have made Peruvian cuisine what it is today - unique.

The rise of Peruvian cuisine has been unstoppable since 2011, when it received the blessing of Alain Ducasse, who defines it as one of the leading trends in the world gastronomy stage. The timing is perfect, with foodies increasingly fussier about what is on their plates, preferring foods that are at the same healthy (certainly not lacking in Peruvian cuisine) and full of taste. Everything starts from incredible raw materials - a great variety of rich, flavourful products. 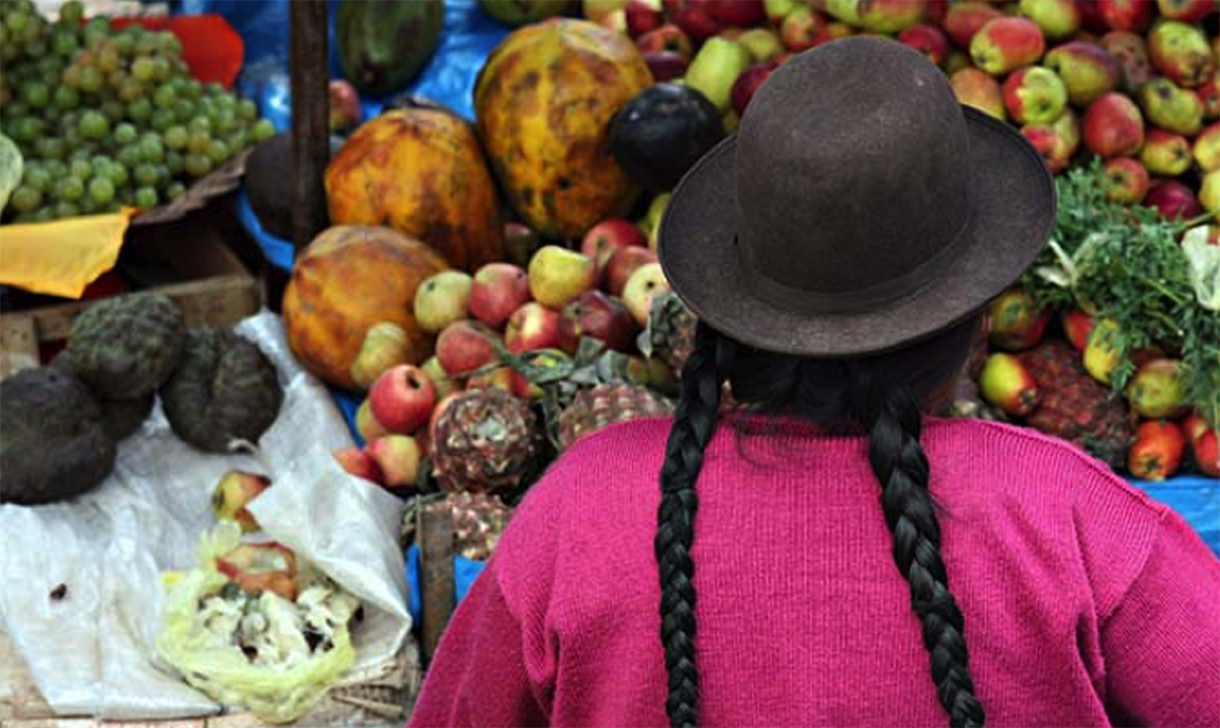 In Peru even the ingredients we are most familiar with take on amazing forms - there are over 3800 types of different potatoes, quinoa, thousands of chilli peppers, an incredible variety of sweetcorn of all colours, including white, yellow, red, purple, orange… There is also lucuma, the fruit of a plant native to the Andean valleys that is one of a kind, with creamy texture and a marked maple syrup and caramel flavour, and amaranth, a cereal-like plant with such small grains that it is called caviar of the Andes.

At a time in which, in many cities, ceviche is also sold in supermarkets side by side with sushi, the importance of markets in Peru should not be underestimated. Even a tight budget will buy you simple but delicious dishes, such as soups with quinoa and vegetables, or arroz a la Cubana (a dish of lightly fried rice with avocado, which in Peru is affectionately known as palta), stewed plantains (a variety of not very sweet banana), pan-cooked eggs, served with hot drinks made of cereals or sweetcorn or drinks of blended fresh tropical fruit. 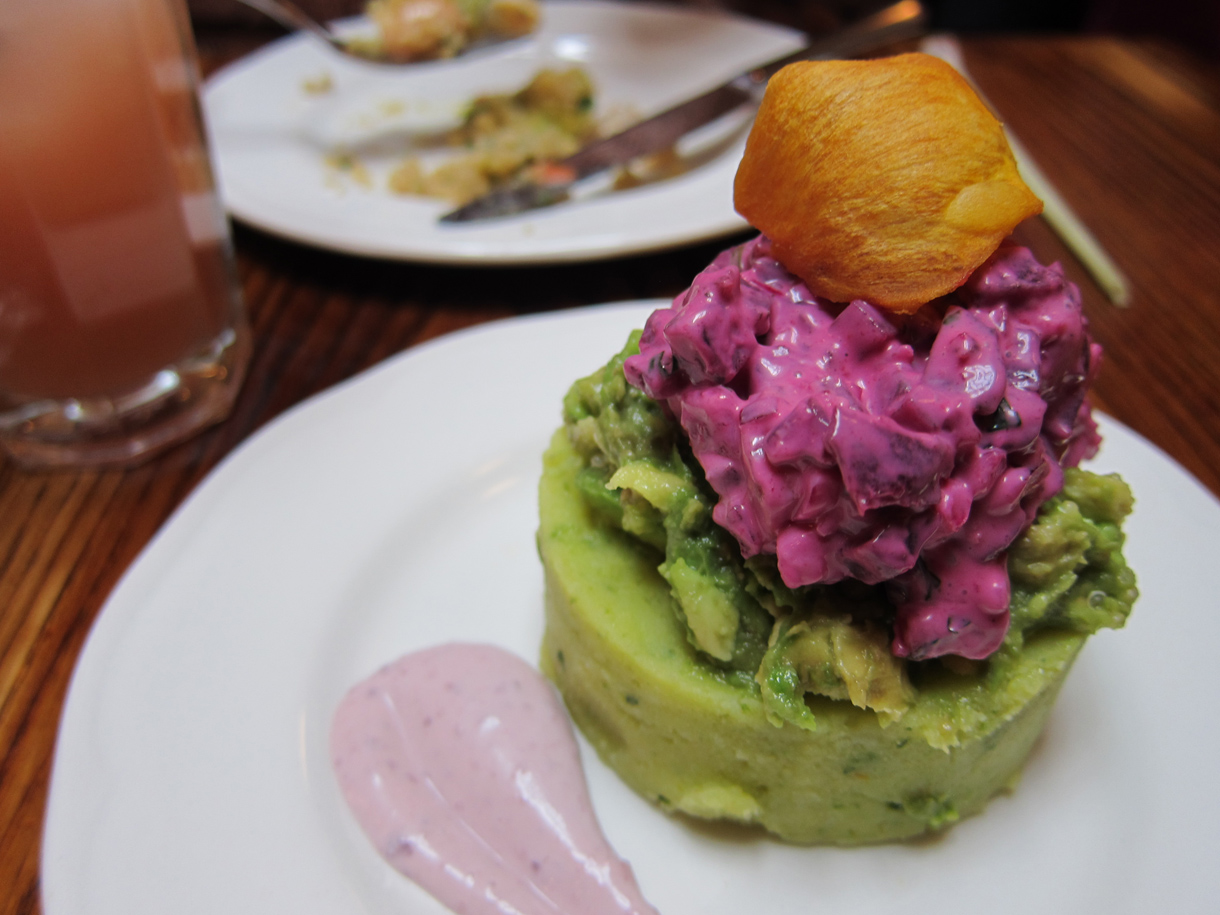 Peruvians love sauces and Ajì de gallina is the full expression of this trend - small bits of chicken meat served with a rich, velvety sauce made of cream, various types of nuts, fresh Peruvian cheese, yellow ajì (a kind of sweet chilli pepper) and bread. This fruity sauce has the right level of spiciness and a nutty flavour. It is served hot and shiny with rice, boiled potatoes and black olives.

Papas a la huancaina, a dish originally from the city of Huancayo, in the Andes, has the same creamy texture of Ajì and is its vegetarian alternative - slices of boiled potatoes topped by a layer of purée made of fresh cheese, yellow ajì, garlic, milk, lime juice, bread and slices of boiled egg. This completely yellow dish is surprisingly good. Always involving potatoes (which are never missing in Peru), the Causa dish combines potatoes with another fruit that is abundantly found in markets all over the country - avocado. Causa is simply the stewed combination of these two ingredients, served cold in a flan with tuna, meat or boiled eggs. It is truly delicious.

Rocoto Relleno is a dish typical of Arequipa, the second biggest city in Peru. It is more of an institution than a dish and is widely served all over the country. Do not be taken in by appearances - what looks like a simple, small stuffed pepper is actually capsicum pubescens, a pepper as hot as jalapeño, which is boiled to reduce its spiciness and then stuffed with minced beef, spices and boiled eggs and covered with melted cheese. 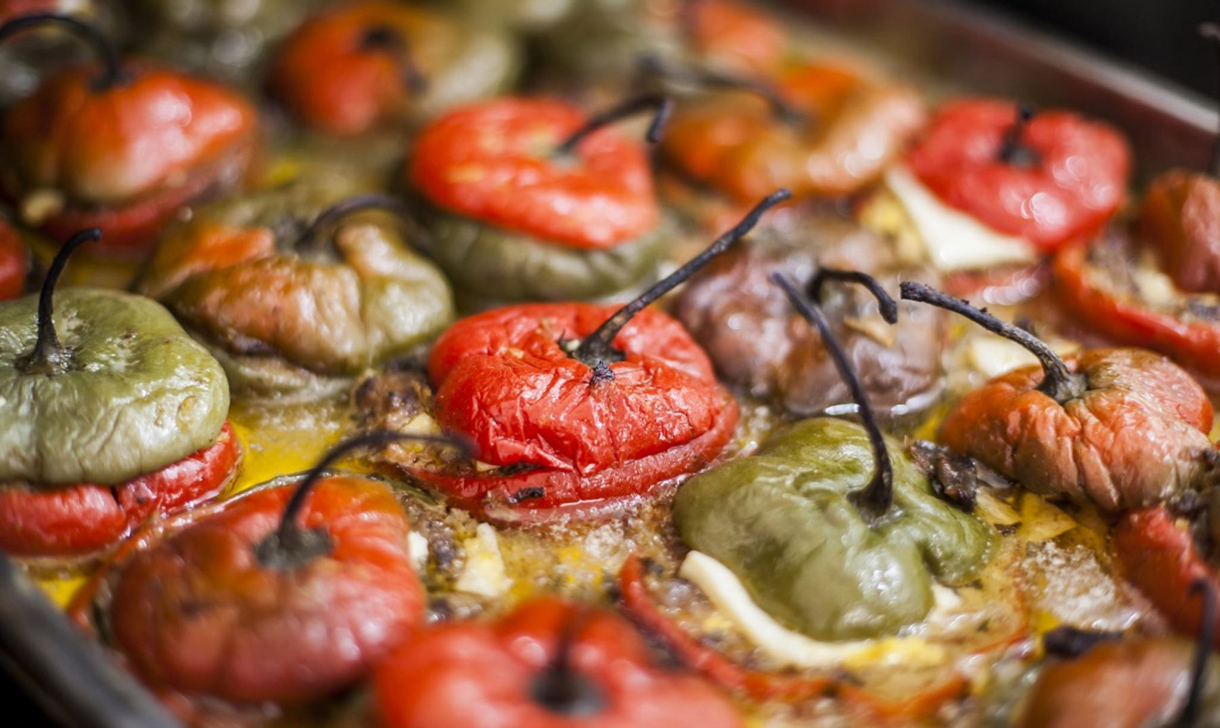 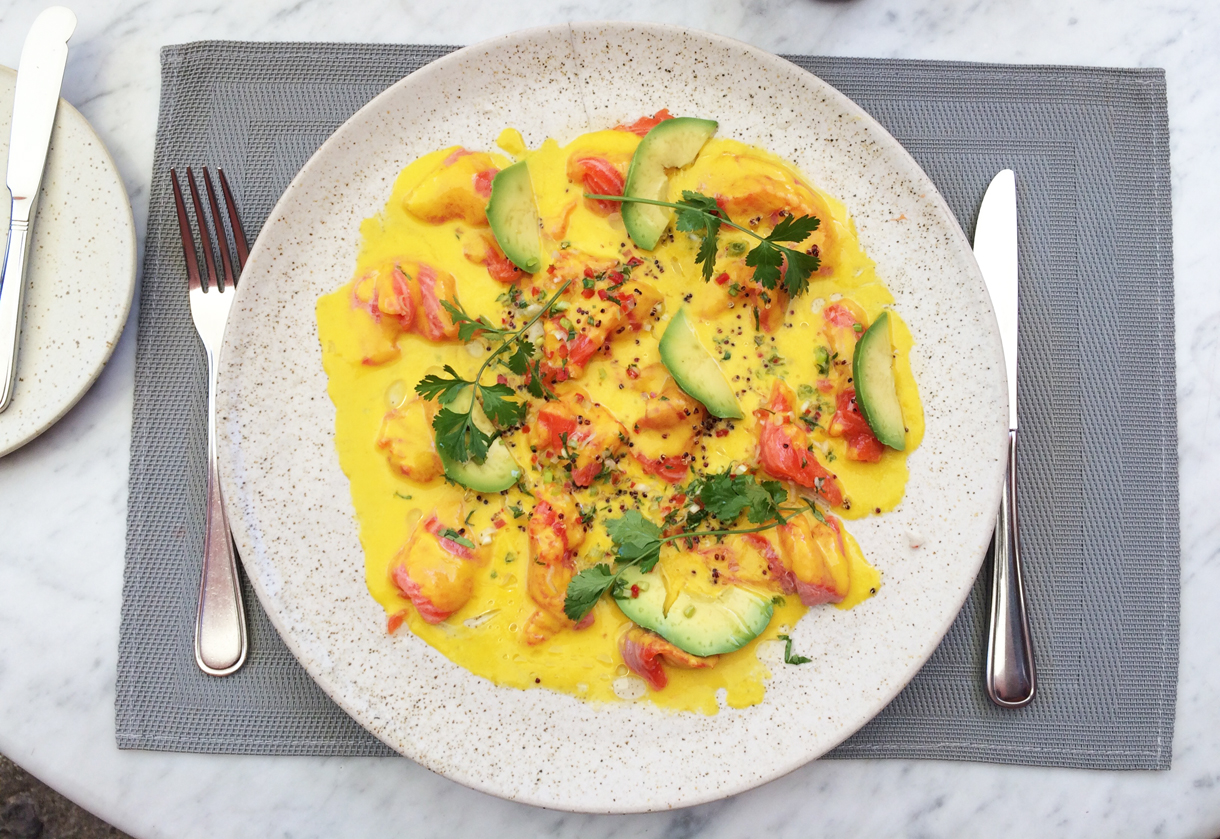 Ceviche is a national dish (and also an obsession for everyone who has tried it) and the highest expression of this country. On the one side, the Ocean is represented by fish - very fresh corvina, tuna, octopus or prawns, diced and marinated in leche de tigre (a marinade with lime, onions, black pepper, chilli pepper and coriander, essentially such a good concoction that it is drunk as such or used as a base for cocktails). On the other side are the Andes, with side dishes such as choclo (a variety of giant sweetcorn, boiled), camote (sweet potato purée) and cancha (toasted and lightly fried sweetcorn grains that balance the dish’s texture with their crunchiness).

Tiradito is the Nippon version of ceviche, in which the fish is sliced like sashimi and a yellow ajì and soy source cream is added to the marinade.

Lomo Saltado, almost as famous as ceviche, is a dish that fully represents chifa cuisine, born from Chinese immigrants in Peru, in which Asian cooking techniques are combined with local ingredients. Juicy strips of marinated beef or alpaca meat are tossed in a wok with onions, tomatoes, ajì peppers, soy sauce and spices and served with rice and fried potatoes (often fried with the meat). This dish is reassuringly delicious. 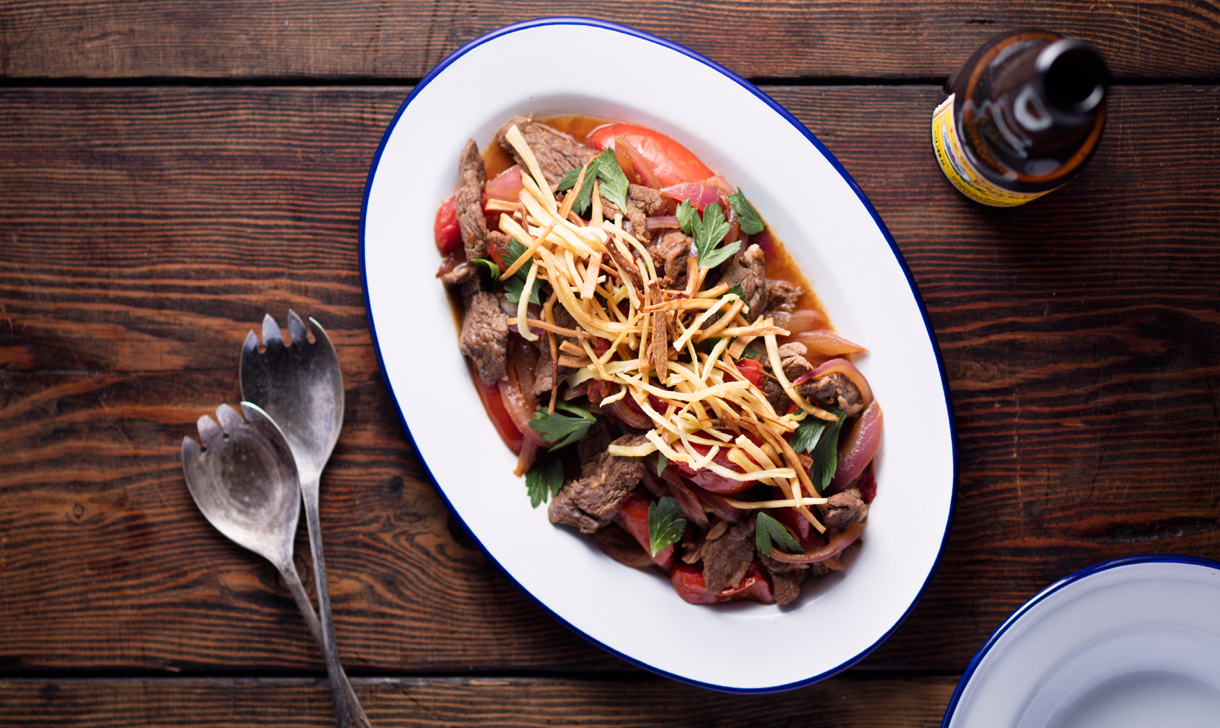 You can try all the above while sipping Chicha Morada, a sweet, scented and fresh drink made from spices and purple sweetcorn.

Gaston Acurio, the Peruvian super star chef who told the whole world of his homeland’s cuisine, has a true empire in Peru and abroad, with star-rated restaurants (such as Astrid y Gastòn) or bistros (such as Chicha). His popularity led him to open eateries in other countries such as Manko in Paris or A&G in Madrid. But there are many cities and towns all over the world where every one of us can find a little corner of Peru outside its borders.

In London, Andina, in Shoreditch, is an institution in which traditional dishes are prepared with a creative twist by Martin Morales using only Peruvian ingredients. In Berlin, Chicha is just as good as the bistro with the same name and offers a rich list of Peruvian dishes in an informal, brightly coloured environment. Llama Inn in New York brings Peru to Williamsburg, Brooklyn, with a focus on grilled meat.

If you really cannot jump onto a plane, all you need to do is book a table! 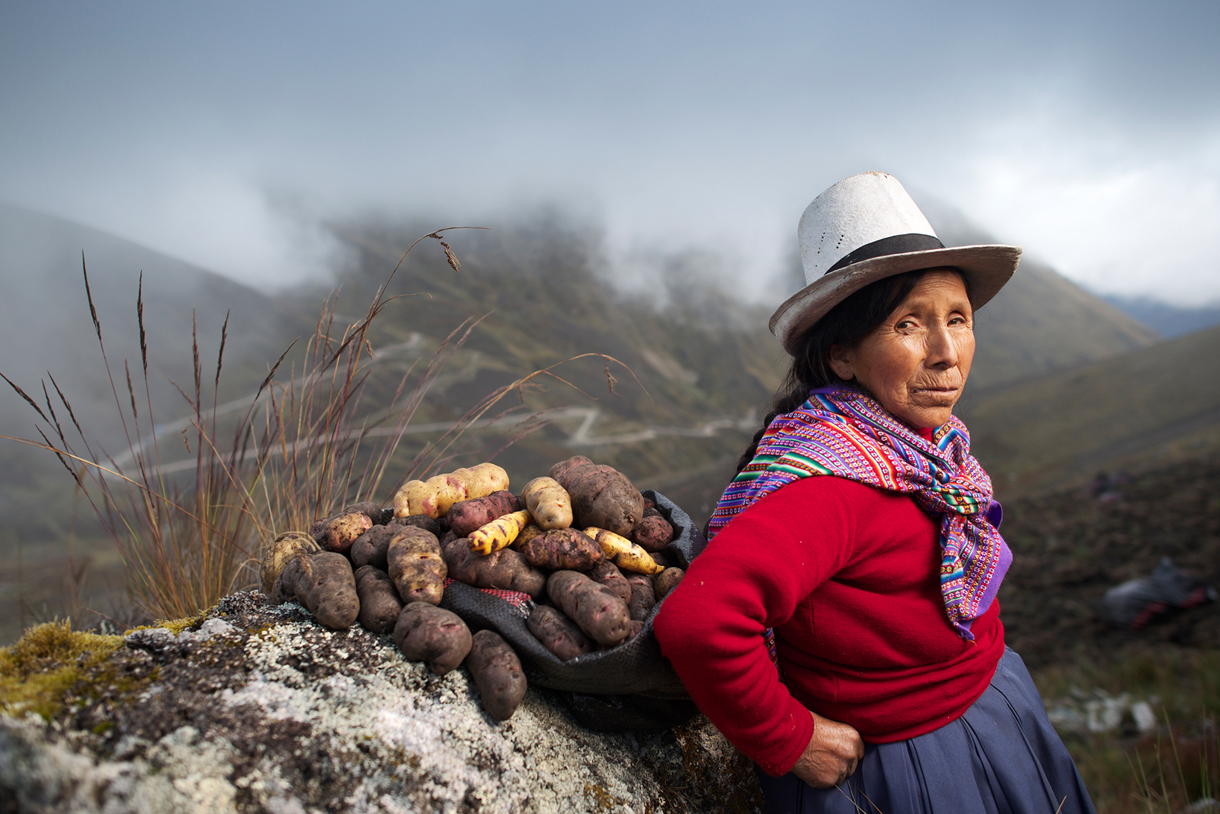